Explore all that Oban has to offer and go on island adventure day trips from Oban.

As a gateway to the Scottish isles, day trips from Oban offer many opportunities to discover some of Scotland’s wonderful islands of the Inner and Outer Hebrides, a day trip to mull from Oban is just the beginning. Looking at day trips from Oban harbour, a regular timetable of ferries offer excursions to islands within a day-trip distance from Oban, with some a little further afield.

Although there are countless options to explore, we’ve listed some of our favourite island destinations including the Isle of Mull, Lismore, Kerrera, Iona, Colonsay and more, for an exciting Oban ferry day trip! 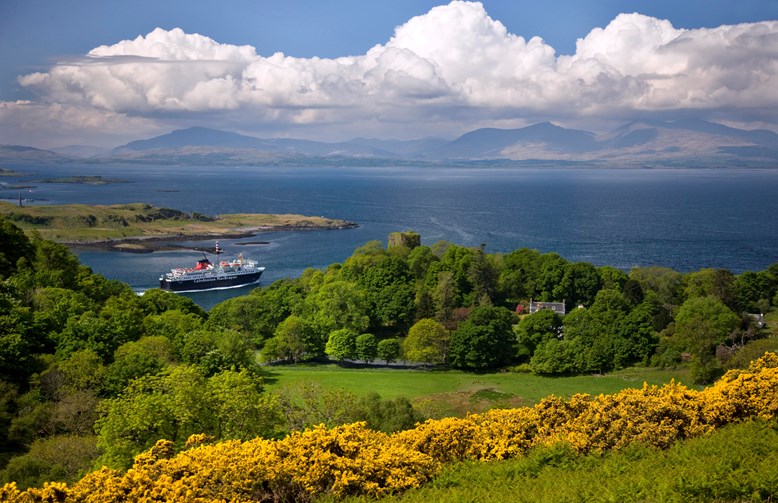 Kerrera is Oban's nearest neighbouring island and guests staying at our Oban Bay Hotel have a spectacular view of it from our sun deck. The ferry journey to Kerrera is only a few minutes and it’s definitely worth a visit during your next break in Oban. At only 4 miles long, the island is a paradise for keen walkers and cyclists, with its quiet roads and stunning scenery.

Perched on the hills at the south side of the island, looking over the Firth of Lorne, are the magnificent ruins of Gylen Castle. Although the castle was burned down in 1647, after less than 100 years of occupation, you can now enter the restored ruins and discover what the castle would have been like back in the fifteenth and sixteenth centuries.

Once you have explored the landscape and learnt about the amazing island history, take a break at the Kerrera Tea Garden to enjoy some tasty treats with amazing views.

For many visitors to Oban, a trip to the Isle of Mull is a holiday highlight, and the 45 minute ferry makes it an ideal choice for a day trip.

Mull attracts visitors throughout the year, with its stunning scenery, fascinating history and wonderful wildlife. The island’s natural beauty is evident across its white sandy beaches, including Calgary Bay and Laggan sands, where you can spot wildlife such as sea eagles, porpoises and go whale watching.

As well as the natural side of Mull, it is also famous for Tobermory’s harbour-front of bright and colourful houses, cafes and shops. Whether you want to spend the day discovering some of Mull’s stunning shorelines or wander around the colourful town of Tobermory; the Isle of Mull is definitely a day-trip worth taking.

If you're looking for more than an Oban day trip to fully explore Mull, our Isle of Mull Hotel & Spa in Craignure is convenient when catching the ferry from Oban to Mull. 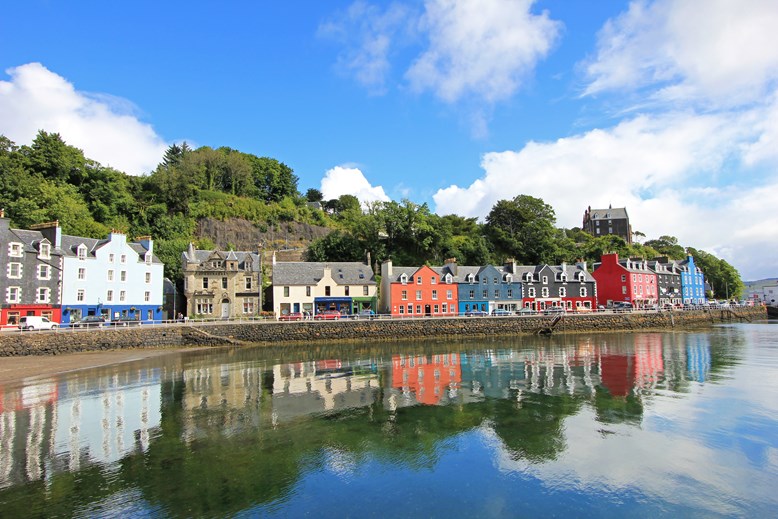 If you would like to extend your day trip on Mull and visit the island of Iona, you can take a 10 minute passenger ferry from the Fionnphort ferry terminal at the south end of Mull across to Iona. Read our Oban to Iona blog for more travelling information. This island may only be three miles long, but there is still so much to see and do.

Iona’s Abbey is a beautiful stone landmark, and is known to be Scotland’s symbolic centre of Christianity that dates back over 1,000 years – a dream day trip for any keen historian.

As well as exploring the beautiful hills and beaches, such as ‘The Hills of the Angels’ and St. Columba’s Bay, you can pick up some Scottish souvenirs at the various galleries across the island. From traditional Ionian jewellery, inspired by its Celtic traditions, to beautiful contemporary artwork crafted by locals.

The Isle of Lismore is another nearby island that is well-worth the 55 minute ferry from Oban’s harbour. As the island is only 10 miles long and one mile wide, you can easily explore the island on foot or by bike and discover some of its fascinating wildlife and historical sites.

Cycle around Lismore and see if you can spot some of the island’s native residents in their natural habitats including seals, peregrines and razorbills. A trip to Lismore isn’t complete without a visit to the Gaelic Heritage Centre, with a museum showcasing the Gaelic origins of the island and highlighting the combination of past and present cultures. 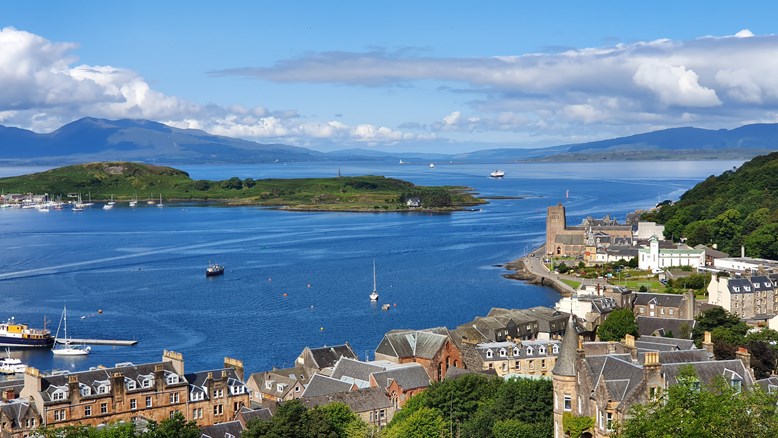 Colonsay in the South is also a Oban day trip for wildlife tours, with porpoise, bottlenose dolphins, minke whales and sometimes rarer frequently spotted from the harbour.

A ferry from Oban to Colonsay takes 2 hours 20 minutes, perfect for an Oban ferry day trip. Colonsay is also connected to a very small tidal island at low tide called Oronsay, with just a few inhabitants, and home to the Oronsay Priory, which is the ruins of a historical monastery.

Isles of Coll and Tiree

West of the Isle of Mull in the Inner Hebdrides lies the Isle of Coll. Best known for its sandy beaches, wildlife and as Scotland's first official Dark Sky island.

Bird watchers will definitely want to take an island trip from Oban to Coll, with Corncrake and Hen Harrier's to be seen in the RSPB reserve. Coll is an idyllic island to visit, packed with sandy beaches for surfing and kayaking, dark skyes for stargazing and an unusually high number of sunshine hours.

A one way trip on the ferry from Oban to Coll takes just over 2 hours 30 minutes, so is ideal for a day trip from Oban.

The Isle of Tiree can be reached by ferry from Coll, taking just 55 minutes. Tiree is the westernmost island in the Inner Hebrides, and is best known for its windsurfing, its white sands, flat shape and fair weather. 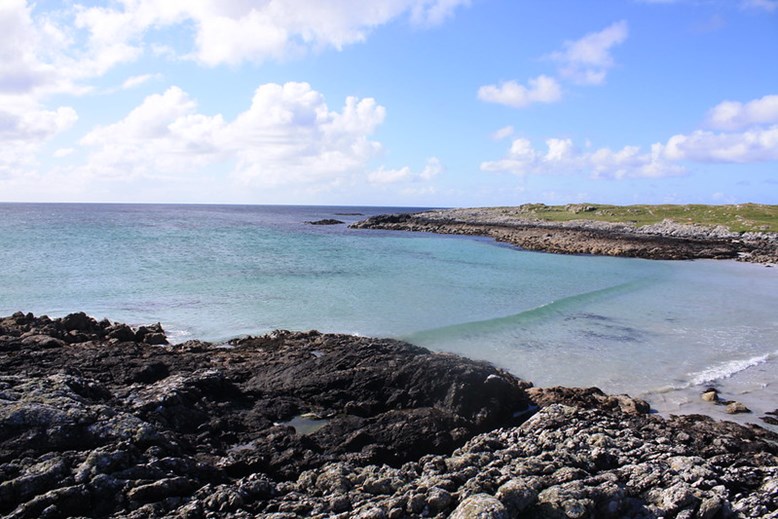 Longer trips - Trips from Oban to the Islands Barra and Vatersay

Barra is best known for Tangasdale, a beautiful white sand beach, as well as Kisimul Castle, a three storey tower house just a short boat ride away, as well as its many wildflowers and rare bird species. Barra is also a great sea kayaking location, and home to the UK's Westernmost golf club.

Vatersay is a small island connected to the south of Barra by a short causeway road, and is the most westerly inhabited place in Scotland. Vatersay is only around 3 miles across, and is connected at low tide to an even smaller island called Uineasan.

You can catch a ferry from Oban to Castlebay, Barra's main village and ferry terminal. Barra might not be a day trip from Oban taking 4 hours 45 minutes on the ferry, but it's well worth stopping over as part of an island hopping itinerary through the Hebridean Islands. 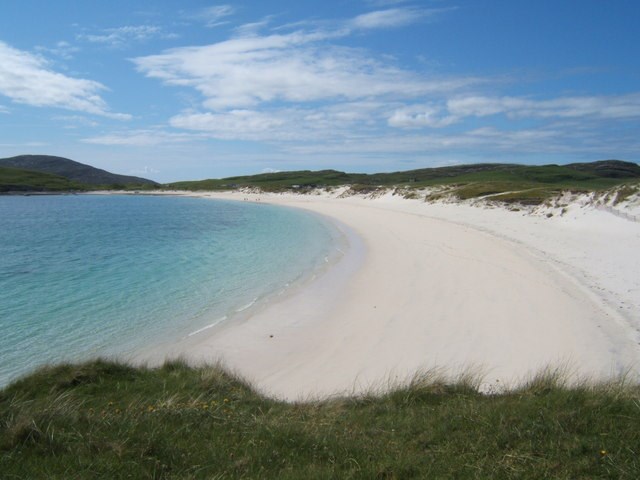 Trip from Oban to South Uist

Uist is the name of a group of islands in the Outer Hebdrides. South Uist is known for its spectacular beaches, its golf course with amazing coastal views, as well as the hill Beinn Mhor, South Uist's highest point.

If you're looking for a day trip from Oban, you might want to consider stopping for the night, because the ferry takes just over 5 hours from Oban to Lochboisdale, the main village and ferry terminal on South Uist.

When you've made it to island, there is a causeway road that links South Uist to to Benbecula, Grimsay, North Uist and Berneray, so you can explore the almost all Uist islands by car.

‘Gateway to the Isles’

Ferries from Oban link the mainland to the isles for explorers and walkers looking for exciting island trips from Oban and island-hopping adventures. Oban itself is a fantastic place to visit, so it’s a bonus that there are so many other destinations to explore during your visit. Our Oban Bay Hotel is a great base to discover the islands off the west coast of Scotland and welcomes those seeking a gateway and a getaway in one.

See the sights, explore the land, rest and recharge. Find out 6 reasons why you should choose Crerar Hotels for your next adventure.